My interests in Anglesey extend to old maps of the island. On this page I give some information about the maps I have had in my collections (some have since been sold). If you find yourself interested in these old maps, you may want to buy one of your own. I have a few antique maps and scenic engravings for sale.

To learn more about old maps have a look at the on-line edition of Antique Maps, by Carl Moreland & David Bannister. There is also an interesting guide to collecting antique maps of Britain and Ireland. An excellent discussion of old maps, with an extensive section of the lives and works of dozens of British mapmakers, can be found in David Smith's book Antique Maps of the British Isles.

Finally, facsimile editions of some of the sources of these maps can be purchased from Amazon.co.uk:

In 1579 Christopher Saxton published his Atlas of England and Wales, the first complete collection of county maps of the kingdom and one of the first national atlases ever produced.

These maps were later reengraved by two Dutch engravers, William Kip and William Hole, for publication in William Camden's Britannia. The map reproduced here is from the 1637 edition, which has larger format maps than the earlier 1607 edition. Saxton's original map had both Anglesey and Caernarfonshire together; Kip and Hole split them into two maps.

John Speed, the son of a tailor and a tailor himself much of his life, produced an ambitious history and atlas of Britain in the early 1600's, under the patronage of Queen Elizabeth I. His maps were notable not only for their accuracy but also for the town plans included on many of the county maps. The maps were first published in 1610-11, by Sudbury and Humble, from engravings by Jodocus Hondius. They were hugely popular and were republished many times over the subsequent century. By 1676 the plates had been bought by Bassett and Chiswell, who produced a new edition, often with slight modifications to the maps. Most noticeable was the addition of the coats of arms of notable local families.

The Anglesey map includes a town plan of Beaumaris.

Other links:
Biography of John Speed, part 1, part 2, part 3
Printer's proof of Anglesey map at Cambridge University Library (note waves and labelling in the sea area are not yet complete)
Purchase a facsimile

This very curious map was one of 30 produced to illustrate Michael Drayton's "Poly-Olbion", a topographical poem describing England and Wales. Its 15,000 lines of verse describe the countryside, history and traditions of the country at the time. Various allegorical figures are included on the maps, in particular water-nymphs in the rivers. This map accompanies the Ninth Song, which begins:

The Muse heere Merioneth vaunts,
And her proud Mountaines highly chaunts.
The Hills and Brooks, to bravery bent,
Stand for precedence from Descent:
The Rivers for them shewing there
The wonders of their Pimblemere.
Proud Snowdon gloriously proceeds
With Cambria’s native Princes deeds.
The Muse then through Carnarvan makes,
And Mon (now Anglesey) awakes
To tell her ancient Druides guise,
And manner of their Sacrifice.
Her Rillets shee together calls;
Then back for Flint and Denbigh falls.

These maps were engraved by William Hole, who also worked on the Speed map above.

An excellent site about the Poly-Olbion can be found at Exeter University's Poly-Olbion project.

In 1595 Gerard Mercator, the mapmaker who coined the term "atlas" and gave his name to the Mercator projection, published a collection of maps of areas of the British Isles as part of his Atlas of the World. This Anglesey map comes from a later edition, published around 1619 (perhaps by Jodocus Hondius).

This map is taken from the book Britannia, published in 1675 by John Ogilby, the "Cosmographer to the King". It contained maps and descriptions of the main routes throughout Britain, presented in the form of ribbons showing the road and nearby landmarks.

This map, part of the London to Holyhead route, shows the section from Chester to Holyhead. The route takes the traveller to Anglesey by crossing the Lavan Sands at low tide from Penmaenmawr on the Welsh mainland to a ferry across the strait to Beaumaris.

This map, engraved by Emanuel Bowen, was published in 1720 in John Owen's Britannia Depicta or Ogilby Improved. This was a road atlas of England and Wales produced at pocket-size to be convenient to carry for travellers. The book contains county maps such as this Anglesey one, followed by a series of strip maps showing the main routes (see some examples here). These were based on the maps of Ogilby, such as the one above.

The text below the map reads: "The Island of MONA or ANGLESEY is in circumference 60 Miles, contains about 200,000 Acres, 74 Parishes & 1840 Houses, has 2 Market Towns, one of which (viz.) Beaumaris sends a Member to Parliament. This Island was anciently called Insula Opaca, from the great quantity of Wood with which it was over grown, but now it is very bare of trees especially in ye Northern & Western parts. The Principal Comodities of this Island are Corn, Cattle, Fish & Fowl, which it produces in such abundance that the Welsh call it Mam Cymru, i.e. the Mother or Nurse of Wales. The Air at certain times by reason of the Mists and Foggs that proceed from ye Irish Sea is Aguish. The Soil is Rocky and Mountainous, it affords plenty of Grind Stones, Milstones, &c."

Entitled "An Accurate Map of the County of Anglesey", this one seems to be anything but. Compared to the above, earlier maps, and modern maps, the outline is oddly distorted. Some later maps, particularly John Cary's map of North Wales in 1787, used this same inaccurate outline.

This map was produced by George Rollos, an engraver who owned a map and print shop in Long Acre, Covent Garden, London. It is one of five maps he contributed to the book "England Displayed. Being a New, Complete, and Accurate Survey and Description of the Kingdom of England, and Principality of Wales." by P. Russell and Owen Price.

This map was first engraved around 1694 for John Seller's "Anglia Contracta. or a description of the kingdom of England & principality of Wales. In several new mapps of all the countyes therein contained." Seller was the hydrographer to the king and was well known in particular for his sea charts. This collection of country maps was popular and several editions were produced over the next decade.

In 1787 Francis Grose published modified versions of these maps in his "The Antiquities of England and Wales". Grose added some text about each county to the page, and replaced the leafy decorative cartouche containing the county name with a plainer outline. 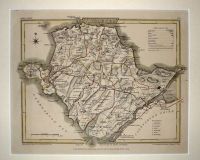 Drawn by G. Cole and engraved by J. Roper for The British Atlas, produced to accompany The Beauties of England & Wales by E.W. Brayley & J. Britton. 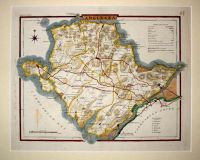 The above Cole & Roper map was later adapted for the map below, published in Thomas Dugdale's Curiosities of Great Britain. England and Wales Delineated. 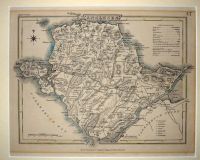 This is also from Thomas Dugdale's Curiosities of Great Britain. England and Wales Delineated, but this later edition began adding railways. The railway symbol has been added to the Explanation and two short railways are shown in Caernarfonshire.

This map was drawn by Creighton and engraved by J&C Walker for Samuel Lewis' Topographical Dictionary. 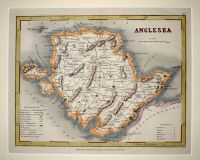 Later editions of Thomas Dugdale's Curiosities of Great Britain. England and Wales Delineated switched from using Cole & Roper maps (like the ones listed above) to ones engraved by Archer. 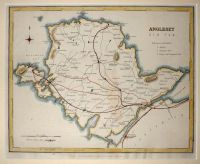 These maps come from the book Hanes y Brytaniaid a'r Cymry (History of the Britons and the Welsh), by Robert John Pryse (also known as Gweirydd ap Rhys), published by William Mackenzie. The basic map is that done by R. Creighton for A Topographical Dictionary of Wales, but has had the new railways overlaid on it (although somewhat inaccurately!). 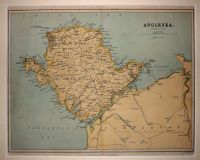 From the book Cymru: yn Hanesyddol, Parthedegol a Bywgraphyddol (Wales: Historical, Topographical and Biographical), a Welsh-language encyclopaedia edited by Rev. Owen Jones and published by Blackie & Son in 1875. 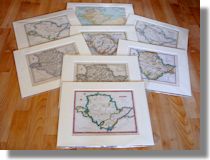 See my page of maps for sale to see pictures and details of some other maps.


A-Z of the Isle of Anglesey